One of CAS’s key innovations is its belt design which has pushed the limits of what slingers are capable of.  These belts feature:

This innovation greatly increased the functionality of the CAS slinger. With a special cleat design and utilizing better rubber, CAS slingers nearly doubled their range and are able to place heavier material for a more sustained period of time than was previously possible.  The placing conveyor belt collects and move material up the conveyor with cleats. The CAS design features a cleat that is nearly twice the height of a standard cleat, but can move more quickly through the conveyor. 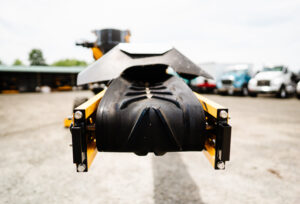 This allows slingers to process more material, faster, which greatly increases the range of material placement – nearly double what was possible with the older design. This, combined with a new, more durable rubber material, has increased the type of material that can be placed under variable conditions.

In addition to increased range, the CAS belts allow for better control of the material which, overall, creates better pattern options for a wider variety of efficiency when placing material in different applications.